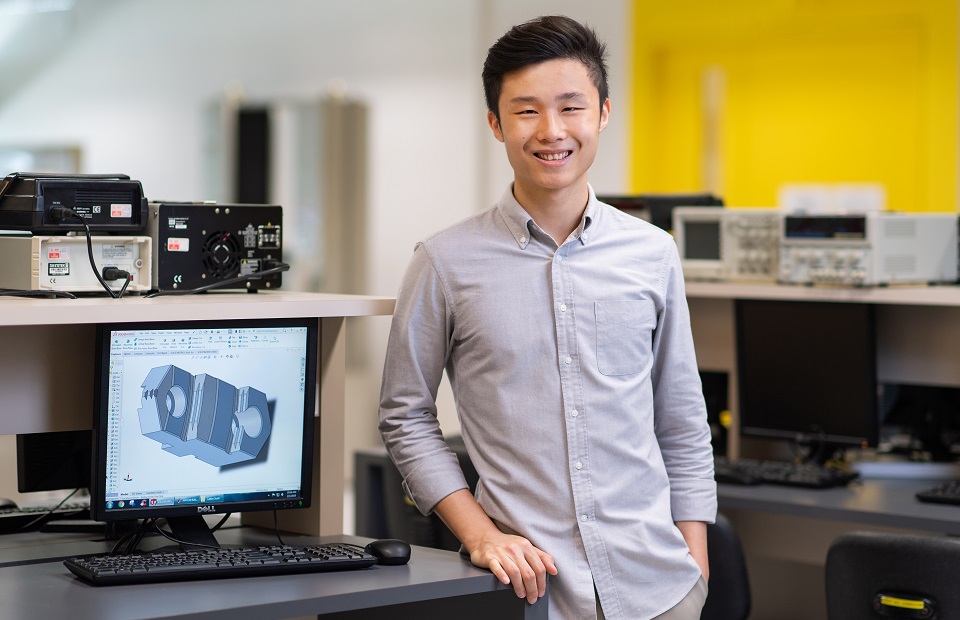 In secondary school, he stepped up to the plate when a class chairperson was needed.

While doing National Service in the navy, he was responsible for allocating manpower and equipment for pontoon operations.

And now as an undergraduate, Mr Leu Kai Jun is president of the Institute of Engineers, Singapore (IES)’s PSB Academy student chapter.

But the 22-year-old did not always have such sure footing.

After completing his National Service in March 2017, the East Spring Secondary School student considered other paths, including business studies. But it was an overseas vacation that brought him clarity.

Mr Leu recalls: “I was invited by my friend to visit his relative’s shoe-sole plant in Indonesia. I was intrigued by how the machines could be re-configured to produce soles of different shapes, sizes and hardness levels, and that sparked my interest in mechanical engineering.”

For one of his modules, Mr Leu did a group project to improve the safety, ease of use and weight of a foldable bicycle’s locking mechanism.

He also enjoys the institute’s approach to independent learning: “Whenever we face problems, our lecturers will give hints. We ask for guidance only when we have exhausted all options,” he says.

“To me, there is a misconception that private educational institutions are less competitive. But I have found that whether you shine as a student depends on how hard you’re prepared to work.”

He was nominated by student advisers to be president of IES’s PSB Academy student chapter, which aims to expose students to industry events, and provide networking and career opportunities. This is the first such IES chapter at a private education institution.

Another post Mr Leu has held since July last year is that of treasurer of the Institution of Engineering and Technology (IET)’s PSB Academy On Campus student chapter, an offshoot of one of the world’s largest engineering institutions.

As president, he coordinates and organises events such as workshops, like the one to certify PSB Academy students in SolidWorks, a computer-aided 3D design programme.

And as a student leader, Mr Leu is reaping benefits beyond academic excellence. “Improving my communication skills and sharpening my command of the English language have helped me do a better job of promoting events and activities, as well as in becoming a better leader.”

He hopes to work in the aerospace industry after obtaining his bachelor’s degree later this year, and then follow through with postgraduate studies.

He has no doubt that his leadership experiences will come in handy.

“Volunteering with the IES and IET student chapters has broadened both my views and network,” he says. “And the advice I have gained from people I meet will shape my vision for my future.”

This article was first published in The Straits Times on Jan 15, 2019.