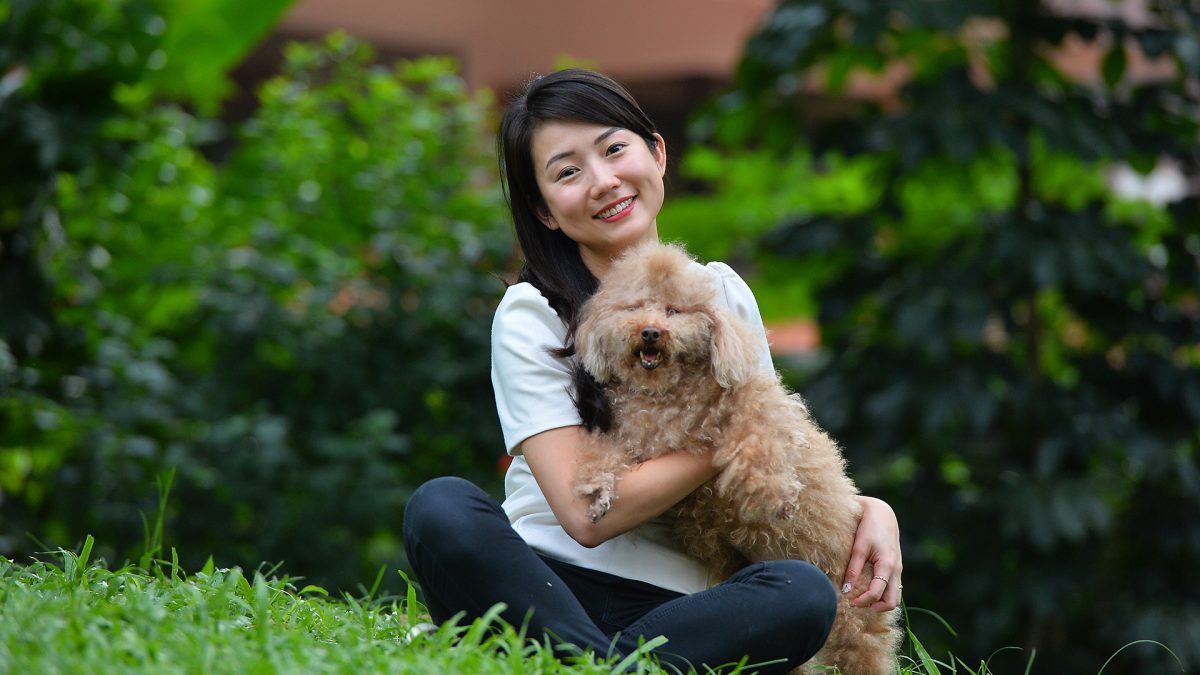 Ms Tan with her pet dog Snuffles. The journalist is passionate about animals and the environment. PHOTO: CHONG JUN LIANG

A nose for news

As a reporter on the environment beat, Ms Audrey Tan is always on the move

ENVIRONMENT and science reporter Audrey Tan, 28, appreciates the flexibility, autonomy and opportunities for travel that come with her job at The Straits Times (ST).

Her interest in nature and culture was developed as an avid reader of the National Geographic magazine.

As she also loved writing, she was inspired to pursue a journalistic career covering biodiversity research, climate change and renewable energy.

“I was drawn to the magazine’s articles on many lesser-known aspects of nature and culture, and the engaging way the stories were told,” says Ms Tan.

Her family members were supportive of her ambition and elated when she was awarded Singapore Press Holdings’ Undergraduate Scholarship in 2009.

There was no anthropology major available when she enrolled in the National University of Singapore (NUS), so she studied sociology andgraduated with a Bachelor in Social Sciences with Second Class (Upper) Honours.

While studying in NUS, she grew to love animals while volunteering with animal welfare organisation PEACE (People Ending Animal Cruelty and Exploitation).

Before joining ST full-time in 2013, Ms Tan was an intern at The New Paper, Razor TV and The Business Times.

“It was great because I got to experiment with different forms of reporting and even gotto pick up video-editing during my two-month-long Razor TV internship,” she says.

Ms Tan feels that the main challenge for journalists is gathering information, especially from people who are tight-lipped about a new or confidential development, or reticent about fully disclosing their views on a potentially sensitive issue.

She says: “Approaching different sources may help you get the information you need.

“The most important trait a journalist must possess is to be ‘kaypoh’ (inquisitive), and thick-skinned so you won’t be deterred from asking questions.”

Being a reporter has allowed Ms Tan to experience many unusual things at interesting places.

One memorable experience was a tip-off from a co-worker who saw a video of a dead whale in Singapore on Facebook.

The sperm whale — the first of its kind to be spotted here — was discovered near Jurong Island. It was eventually towed to the National Environment Agency’s (NEA) incineration plant.

After getting appropriate security clearance from NEA and the Maritime and Port Authority of Singapore, Ms Tan and ST photographer Lim Yaohui rushed to be the first  to join scientists from the Lee Kong Chian Natural History Museum on a boat ride to view the whale’s carcass.

It was one of the highlights of her career.

Ms Tan has also been on other enjoyable excursions for work, such as attending a media training session for journalists conducted by the United Nations in Doha, and diving at Sisters’ Islands, Singapore’s first dive trail. The latter assignment was perfect for the avid scuba diver.

She has also interviewed Nobel Laureates and scientists from prestigious institutions in Singapore and abroad.

One notable figure she interviewed was National Geographic marine photographer and conservationist Brian Skerry when he was in Singapore in 2016.

She has always looked up to Mr Skerry for his unwavering passion in his work.

In the course of her own work, she has learnt to never lose sight of her purpose at work.

“I feel like there’s still so much about Singapore’s natural environment that people don’t know about. And it’s my job to tell them about it,” she says.

Her advice to those considering a potential career in journalism is to “recognise the pros and cons”.

She explains: “You may have to work long hours and weekends, but on the flip side, you get lots of flexibility and autonomy at work.

“And you don’t have to wear stuffy office attire every day!”

This article was first published in The Straits Times on Jan 6, 2018.